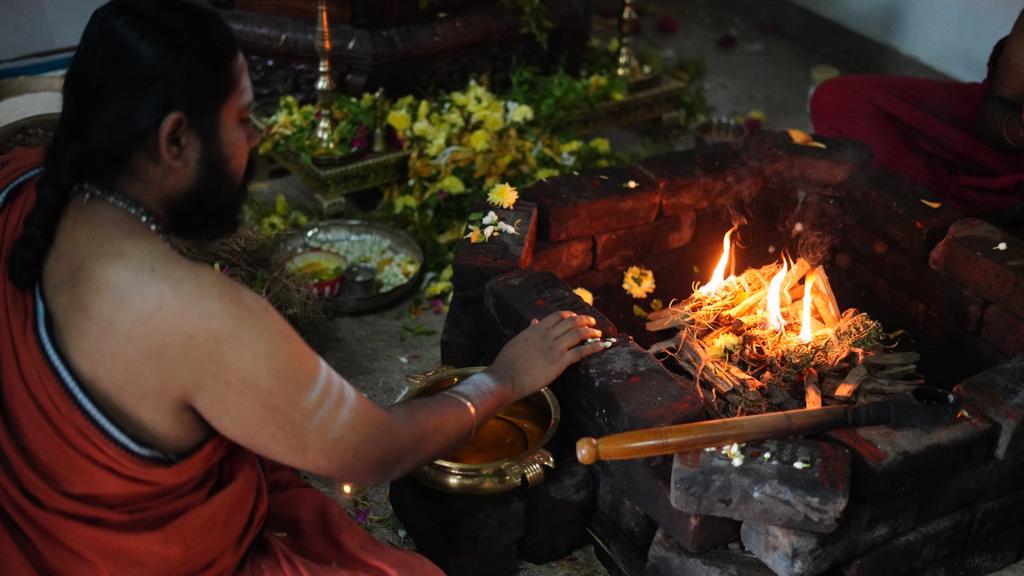 Legends has that Lord Agni was appointed as a bridge between the worlds and directly blessed by lord vishnu. Lord Agni is described as two faces with seven tongues and seated on a mesha vahana or aries chariot. It is since time immemmorial yagyams are considered to be the greatest wealth and the achievement one can cherish about. Best is eg is our former prime minister Vajpai, the suffix Vajpai is due to the vajpayee yagya done by his ancestors which became the suffix of their lineage such is the credit of a yagyam. Yagyam or fire rituals, is the only sort after solution to any problem. Agni mukham is performed once the poorvanga yagyam is completed. The fire Altair is then purified with necessary mantra invocatoons and the first reverence is paid to Sri Varaha Swamy as he is said to be the form of altair. Then lord fire is invoked with his consorts in the altair fire. Lord Agni has two consorts Swaha Devi and Shwatha Devi. Whenever an yagyam is done for the sake of deities Swaha Devi is invoked. Whenever there is a fire ritual for Ancestor related rituals Shwatha Devi is invoked. It is only after the Agni Mukham the things scheduled to offer is purified in the same fire ignited.